Pastor Bramwell preached this sermon on Galatians 4:4-5 on December 30, 2018, The First Sunday after Christmas.

But when the fullness of time had come, God sent forth his Son, born of woman, born under the law, 5 to redeem those who were under the law, so that we might receive adoption as sons.

So Jesus said to the Jews who had believed him, “If you abide in my word, you are truly my disciples, 32 and you will know the truth, and the truth will set you free.” 33 They answered him, “We are offspring of Abraham and have never been enslaved to anyone. How is it that you say, ‘You will become free’?”

34 Jesus answered them, “Truly, truly, I say to you, everyone who practices sin is a slave to sin. 35 The slave does not remain in the house forever; the son remains forever. 36 So if the Son sets you free, you will be free indeed.

Pastor Bramwell preached this sermon on Mark 10:17-22 on October 14, 2018, The Twenty-first Sunday after Pentecost.

And as he was setting out on his journey, a man ran up and knelt before him and asked him, “Good Teacher, what must I do to inherit eternal life?” 18 And Jesus said to him, “Why do you call me good? No one is good except God alone. 19 You know the commandments: ‘Do not murder, Do not commit adultery, Do not steal, Do not bear false witness, Do not defraud, Honor your father and mother.’” 20 And he said to him, “Teacher, all these I have kept from my youth.” 21 And Jesus, looking at him, loved him, and said to him, “You lack one thing: go, sell all that you have and give to the poor, and you will have treasure in heaven; and come, follow me.” 22 Disheartened by the saying, he went away sorrowful, for he had great possessions.

Come to me, all who labor and are heavy laden, and I will give you rest. 29 Take my yoke upon you, and learn from me, for I am gentle and lowly in heart, and you will find rest for your souls. 30 For my yoke is easy, and my burden is light.”

Pastor Bramwell preached this sermon on Mark 9:30-37 on September 23, The Eighteenth Sunday after Pentecost, 2018. 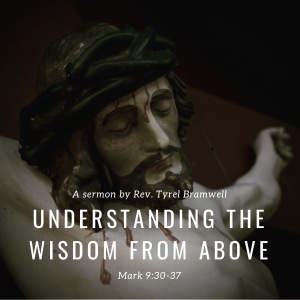 30 They went on from there and passed through Galilee. And he did not want anyone to know, 31 for he was teaching his disciples, saying to them, “The Son of Man is going to be delivered into the hands of men, and they will kill him. And when he is killed, after three days he will rise.” 32 But they did not understand the saying, and were afraid to ask him.

33 And they came to Capernaum. And when he was in the house he asked them, “What were you discussing on the way?” 34 But they kept silent, for on the way they had argued with one another about who was the greatest. 35 And he sat down and called the twelve. And he said to them, “If anyone would be first, he must be last of all and servant of all.” 36 And he took a child and put him in the midst of them, and taking him in his arms, he said to them, 37 “Whoever receives one such child in my name receives me, and whoever receives me, receives not me but him who sent me.”

13 Who is wise and understanding among you? By his good conduct let him show his works in the meekness of wisdom. 14 But if you have bitter jealousy and selfish ambition in your hearts, do not boast and be false to the truth. 15 This is not the wisdom that comes down from above, but is earthly, unspiritual, demonic. 16 For where jealousy and selfish ambition exist, there will be disorder and every vile practice. 17 But the wisdom from above is first pure, then peaceable, gentle, open to reason, full of mercy and good fruits, impartial and sincere. 18 And a harvest of righteousness is sown in peace by those who make peace.

4 What causes quarrels and what causes fights among you? Is it not this, that your passions are at war within you? 2 You desire and do not have, so you murder. You covet and cannot obtain, so you fight and quarrel. You do not have, because you do not ask. 3 You ask and do not receive, because you ask wrongly, to spend it on your passions. 4 You adulterous people! Do you not know that friendship with the world is enmity with God? Therefore whoever wishes to be a friend of the world makes himself an enemy of God. 5 Or do you suppose it is to no purpose that the Scripture says, “He yearns jealously over the spirit that he has made to dwell in us”? 6 But he gives more grace. Therefore it says, “God opposes the proud but gives grace to the humble.” 7 Submit yourselves therefore to God. Resist the devil, and he will flee from you. 8 Draw near to God, and he will draw near to you. Cleanse your hands, you sinners, and purify your hearts, you double-minded. 9 Be wretched and mourn and weep. Let your laughter be turned to mourning and your joy to gloom. 10 Humble yourselves before the Lord, and he will exalt you.

Pastor Bramwell preached this sermon on Mark 9:14-29 on September 16, The Seventeenth Sunday after Pentecost, 2018. 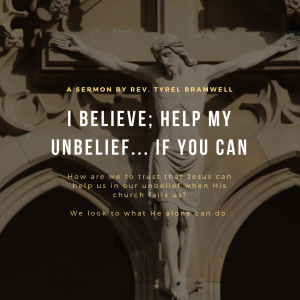 And when they came to the disciples, they saw a great crowd around them, and scribes arguing with them. 15 And immediately all the crowd, when they saw him, were greatly amazed and ran up to him and greeted him. 16 And he asked them, “What are you arguing about with them?” 17 And someone from the crowd answered him, “Teacher, I brought my son to you, for he has a spirit that makes him mute. 18 And whenever it seizes him, it throws him down, and he foams and grinds his teeth and becomes rigid. So I asked your disciples to cast it out, and they were not able.” 19 And he answered them, “O faithless generation, how long am I to be with you? How long am I to bear with you? Bring him to me.” 20 And they brought the boy to him. And when the spirit saw him, immediately it convulsed the boy, and he fell on the ground and rolled about, foaming at the mouth. 21 And Jesus asked his father, “How long has this been happening to him?” And he said, “From childhood. 22 And it has often cast him into fire and into water, to destroy him. But if you can do anything, have compassion on us and help us.” 23 And Jesus said to him, “‘If you can’! All things are possible for one who believes.” 24 Immediately the father of the child cried out and said, “I believe; help my unbelief!” 25 And when Jesus saw that a crowd came running together, he rebuked the unclean spirit, saying to it, “You mute and deaf spirit, I command you, come out of him and never enter him again.” 26 And after crying out and convulsing him terribly, it came out, and the boy was like a corpse, so that most of them said, “He is dead.” 27 But Jesus took him by the hand and lifted him up, and he arose. 28 And when he had entered the house, his disciples asked him privately, “Why could we not cast it out?” 29 And he said to them, “This kind cannot be driven out by anything but prayer.”

Pastor Bramwell preached this sermon on Mark 7:36 on September 9, The Sixteenth Sunday after Pentecost, 2018.

Pastor Bramwell preached this sermon on Mark 7:14-23 on September 2, The Fifteenth Sunday after Pentecost, 2018.

And he called the people to him again and said to them, “Hear me, all of you, and understand: 15 There is nothing outside a person that by going into him can defile him, but the things that come out of a person are what defile him.” 17 And when he had entered the house and left the people, his disciples asked him about the parable. 18 And he said to them, “Then are you also without understanding? Do you not see that whatever goes into a person from outside cannot defile him,19 since it enters not his heart but his stomach, and is expelled?” (Thus he declared all foods clean.) 20 And he said, “What comes out of a person is what defiles him. 21 For from within, out of the heart of man, come evil thoughts, sexual immorality, theft, murder, adultery, 22 coveting, wickedness, deceit, sensuality, envy, slander, pride, foolishness. 23 All these evil things come from within, and they defile a person.”

Pastor Bramwell preached this sermon on Mark 7:1-13 on August 26, The Fourteenth Sunday after Pentecost, 2018.

Now when the Pharisees gathered to him, with some of the scribes who had come from Jerusalem, 2 they saw that some of his disciples ate with hands that were defiled, that is, unwashed. 3 (For the Pharisees and all the Jews do not eat unless they wash their hands properly, holding to the tradition of the elders, 4 and when they come from the marketplace, they do not eat unless they wash.And there are many other traditions that they observe, such as the washing of cups and pots and copper vessels and dining couches.) 5 And the Pharisees and the scribes asked him, “Why do your disciples not walk according to the tradition of the elders, but eat with defiled hands?” 6 And he said to them, “Well did Isaiah prophesy of you hypocrites, as it is written,

“‘This people honors me with their lips,
but their heart is far from me;
7 in vain do they worship me,
teaching as doctrines the commandments of men.’

8 You leave the commandment of God and hold to the tradition of men.” 9 And he said to them, “You have a fine way of rejecting the commandment of God in order to establish your tradition! 10 For Moses said, ‘Honor your father and your mother’; and, ‘Whoever reviles father or mother must surely die.’ 11 But you say, ‘If a man tells his father or his mother, “Whatever you would have gained from me is Corban”’ (that is, given to God)— 12 then you no longer permit him to do anything for his father or mother, 13 thus making void the word of God by your tradition that you have handed down. And many such things you do.”

Pastor Bramwell preached this sermon on John 6:63-68 on August 19, The Thirteenth Sunday after Pentecost, 2018.

The words that I have spoken to you are spirit and life. 64 But there are some of you who do not believe.” (For Jesus knew from the beginning who those were who did not believe, and who it was who would betray him.) 65 And he said, “This is why I told you that no one can come to me unless it is granted him by the Father.”

66 After this many of his disciples turned back and no longer walked with him.67 So Jesus said to the twelve, “Do you want to go away as well?” 68 Simon Peter answered him, “Lord, to whom shall we go? You have the words of eternal life,

A home for sinners.
A place for the wounded.
A light in the darkness.
A refuge for the weary.

Today’s sermon is on the words Jesus spoke to the royal official in John 4:48. St. John tells us that he included the signs (miracles) Jesus did so that his readers would believe in Christ. The Divine Service starts at 10:30 AM. 795 Berding St. Ferndale, CA #Humboldtcounty #visitferndale
The sermon podcast has been updated. Check out the SERMONS page at our website to listen or subscribe.
Come and hear the good news at 10:30 AM. 795 Berding St. Ferndale, CA. #visitferndale #humboldtcounty #lostcoastlutheran
What is there to fear about Judgment Day? For the Christian? Nothing! Come learn all about it this morning. The Service begins at 10:30 AM. #visitferndale #lostcoastlutheran #humboldtcounty